Peter Anthony Kincaid
Nations that included the lands of Kincaid.

The lands of Kincaid have remained in the same place, but throughout the centuries they formed part of different political domains. Here will be given a brief summary, with maps*, of the tribes or nations that included the lands of Kincaid.

Many times the names of the tribes or nations come from outside sources. Thus, one can't be certain what some people called themselves. When possible, the spelling used here is that which was contemporary. To avoid ambiguity, the modern English reference is added in brackets. Furthermore, one can't be certain that this is an exhaustive list. Only references to the more significant ones survive.

Finally, a yellow star has been added to each map. This identifies the location of the Kincaid lands.

The tribes of North Briton

The Antonine Wall, named after the Roman emperor Antoninus Pius who ordered its construction, was built by the Romans from the rivers Forth to the Clyde about 142 AD. The wall was first abandoned about 157 AD. However, it was firmly reoccupied by the emperor Septimius Severus about 208 AD; hence it being sometimes referred to as the Severan Wall. It was abandoned for good a few years later.

In the 2nd century AD, Claudius Ptolemaeus (known in English as Ptolemy) published a cartography of the Greco-Roman world called Geographia. The British Isles, therein called Albion, was covered in book 2, chapter 2. From this we get an indication of the tribes of Scotland at that time. These are illustrated in the map below. Most of the names only appear in Ptolemy's work raising questions about their authenticity. Those below the river Forth would certainly have been known to the Romans who occupied that area.

The Novantae can be clearly placed in Galloway. To the north of them were the Damnii (also known as the Damnoni) which places them at least in the Clyde valley. They had six towns associated with them; namely Colanica, Vindogara, Coria, Alauna, Lindum and Victoria. Some of these towns were north of the river Clyde. Thus, it is likely that the territory included lands about the Antonine wall. As such, it is assumed that the Kincaids lands, adjacent to the Antonine wall were part of the territory of the Damnii. 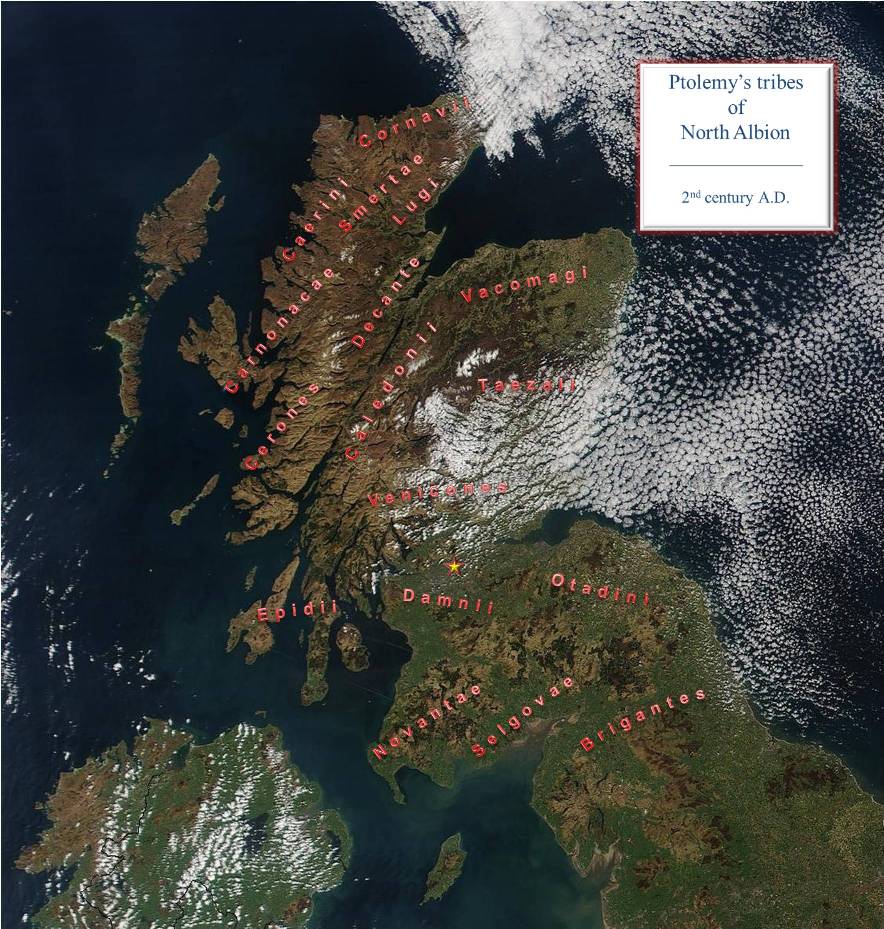 Following the withdrawal of the Romans from the British Isles about 410 AD, a turbulent period ensued which attracted invaders. The first to arrive were the Scots from County Antrim in Northern Ireland who set up the kingdom of Dal Riata in modern Argyll. The Angles from northern Germany set up the coastal kingdoms of Bernice (Bernicia) and Dere (Deira) in the 6th century AD. The former included lands between the rivers Tweed and the Tees and the latter included lands between the rivers Tees to the Humber.

Of the tribes south of the river Forth, the nation of Guotodin (modern Welsh Gododdin) emerged from the Otadini territory; Rheged apparently from the Selgovae; and Alclud (Old Welsh Alt Clut) from the Damnii.

Alclud**, widely interpreted as rock of the Clyde, is considered to be a Briton kingdom based on the fortress at Dumbarton. Dumbarton certainly commands the counties of Dumbarton and Renfrew and the kingdom likely took in parts of counties Stirling, Lanark, and Ayr. At the north end of Loch Lomond is Clach nam Breatann, the rock of the Britons, which is thought to be a marker for the northern limits of Alclud. Certainly, the borders of the earldom of Lennox are natural ancient boundaries and likely represent the core of any kingdom based on Dumbarton. The lands of Kincaid fall within this ancient boundary.

At the head of the river Forth was the Manaw. They are referred to, in modern Welsh, as the Manaw Gododdin to distinguish them from the Isles of Man which in Welsh is Ynys Manaw. The Manaw name is preserved in Slamannan, Dalmeny (formerly Dumanyn) amd Clackmannan.

North of the Forth, the tribes were collectively called the Picts. They include the Caledonians and the Maeatae who harassed the Romans prior to their departure. 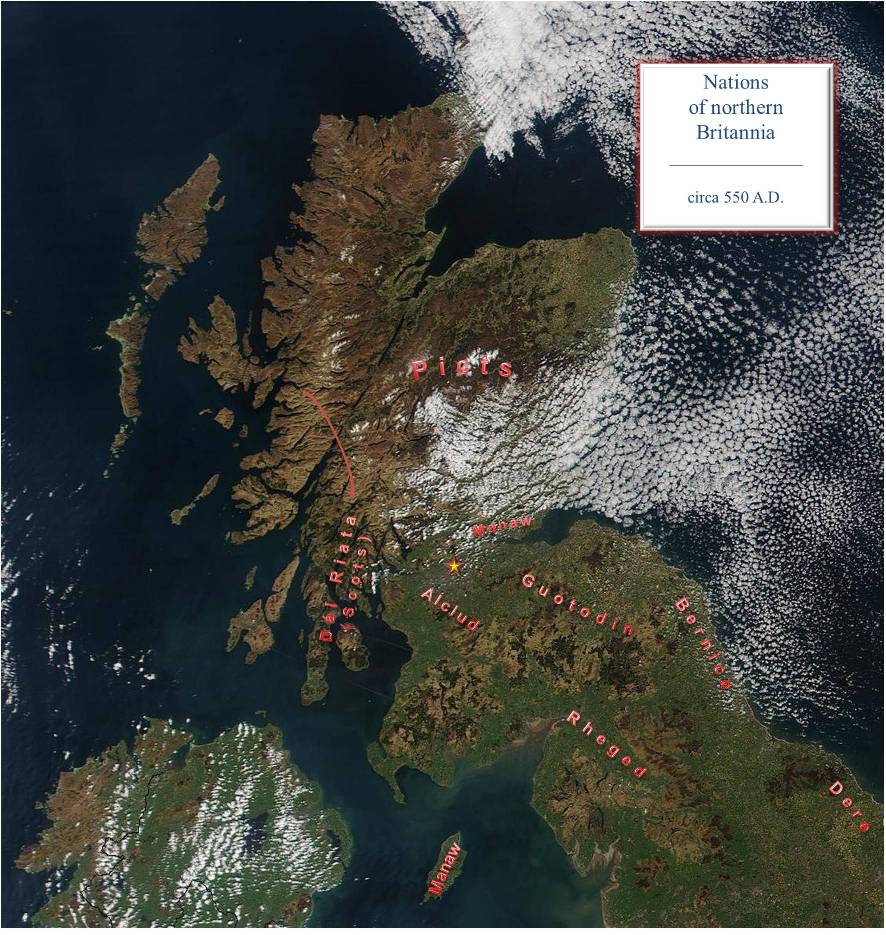 In the latter part of the 6th century, the Dal Riata under Áedán mac Gabráin greatly expanded into Pictish territory. About 604 AD, ĆŢelfriŢ (Ćthelfrith) united the kingdoms of Bernice and Dere to create the new kingdom of Norđhymbra or Norţanhymbra (Northumbria in modern English). However, it is believed that between 633-634 AD and 644-664 AD it relapsed to its former states. By 638 AD, King Edwin of Norđhymbra defeated the Guotodin and annexed their lands. 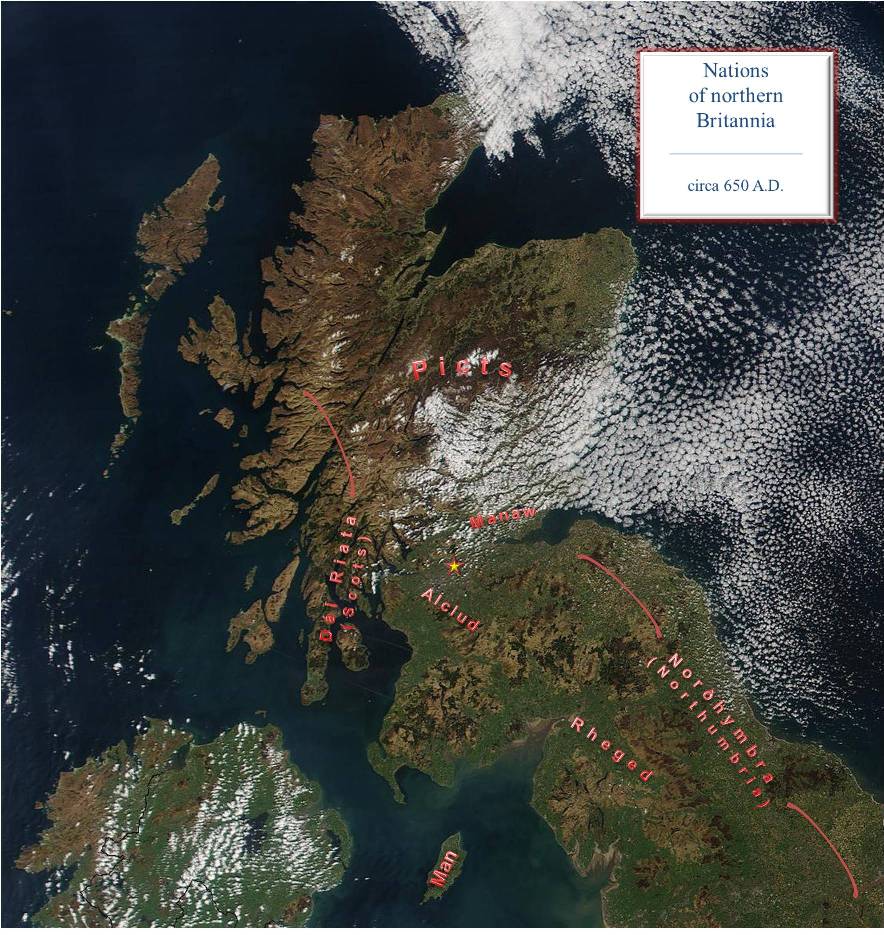 Manaw may have fallen to the Angles of Norđhymbra around 655 AD given that it is believed that it was in this territory that Penda of Myrce (Mercia) beseiged Oswiu of Bernice. Regardless, Manaw ceased to exist as an independent nation after the Angles defeated the Picts in Manaw territory at Mag Manonn in 711 AD.

Sometime before 730 AD, Rheged was annexed by the Angle kings of Norđhymbra. It is thought that this came about through the marriage of Oswiu of Norđhymbra and princess Riemmelth of Rheged. 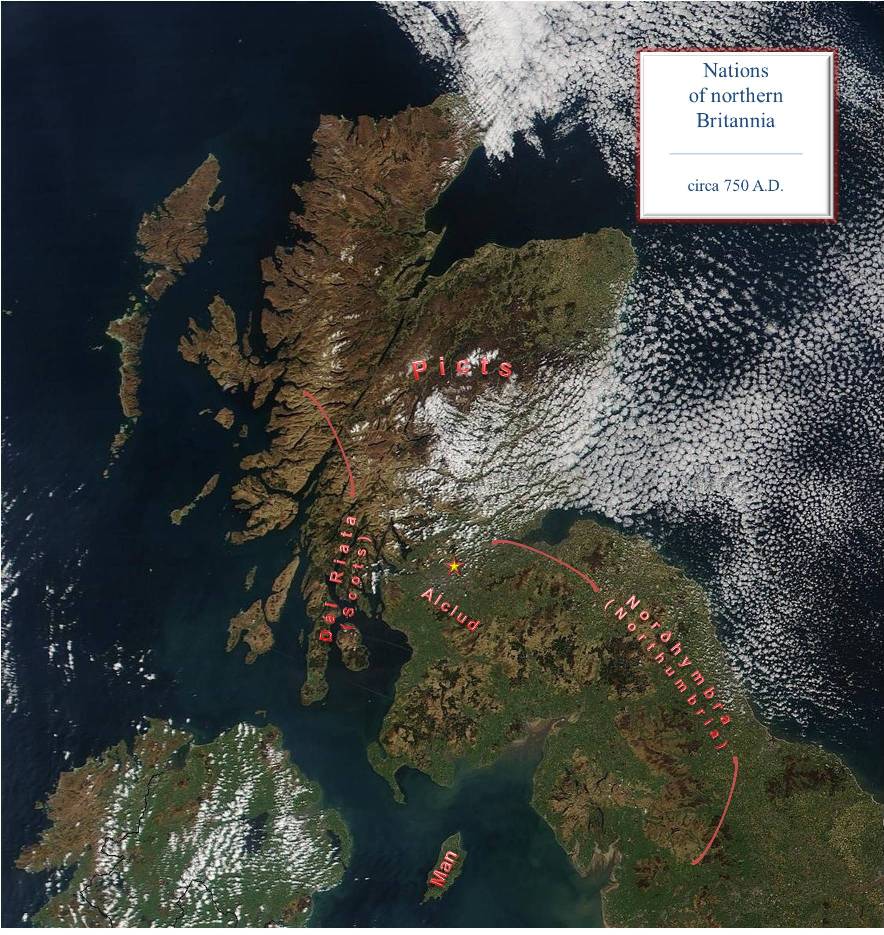 Invasion of the Vikings

The Norse onslaught began in earnest when the Vikings defeated the Picts in 839 AD. By 849 AD, the north and west coasts of Scotland were controlled by the Vikings. Dal Riata ceased to exist and the western isles became known as Innse-Gall (Islands of the foreigners). About 875 AD, the Norse king Haraldr hárfagri (Harald Fairhair) secured the isles and created the jarldom of Orkneyjar (Orkney).

The Annals of Ulster record that in 820 AD, Custantin, son of Fergus, king of Fortrenn, died. They refer to it as a Pictish country in 866 AD. Furthermore, in 904 AD, they note that Imhar grandson of Imhar (Ivar) was slain by the men of Fortrenn. Whether it is synonymous with Pictland is debated but it is now believed to be in the vicinity of Moray. Uerturio and Fortriu are hypothetical Pictish and Old Irish nominative forms of the genitive Fortrenn and dative Fortrinn. 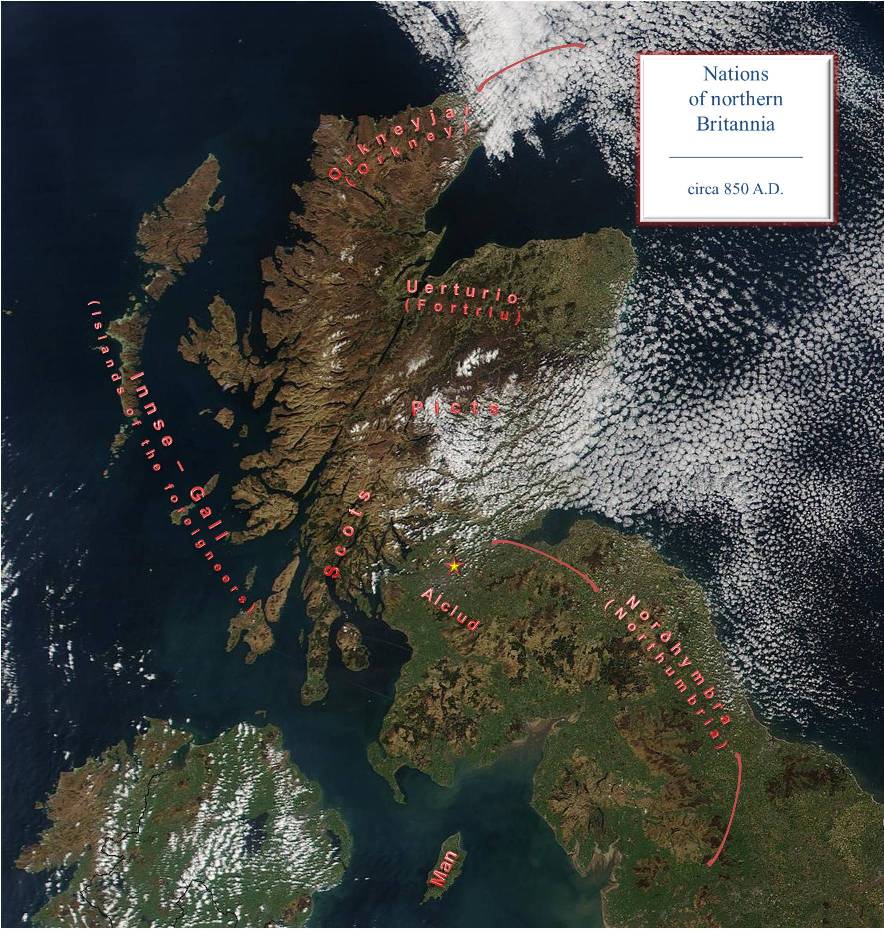 In 870 AD, the Norse leaders Amlaíb and Ímar laid siege to Alclud and are said to have captured its fortress and taken many prisoners back to Ireland. The kingdom of the Britons then becomes known as Ystrat Clut (Strathclyde) or Strath-Cluade. Norse settlement is evident in Ystrat Clut with hogback graves at Govan.

The Great Danish Army led by the brothers Ivarr, Halfdene and Hubba (sons of Ragnarr Lođbrók) conquered Norđhymbra in 867 AD and installed Ecgberht as a puppet king. By 876 AD, Ivarr's successor, Guthrum, consolidated the Viking holdings under what became known as the Danelagen (Danelaw). 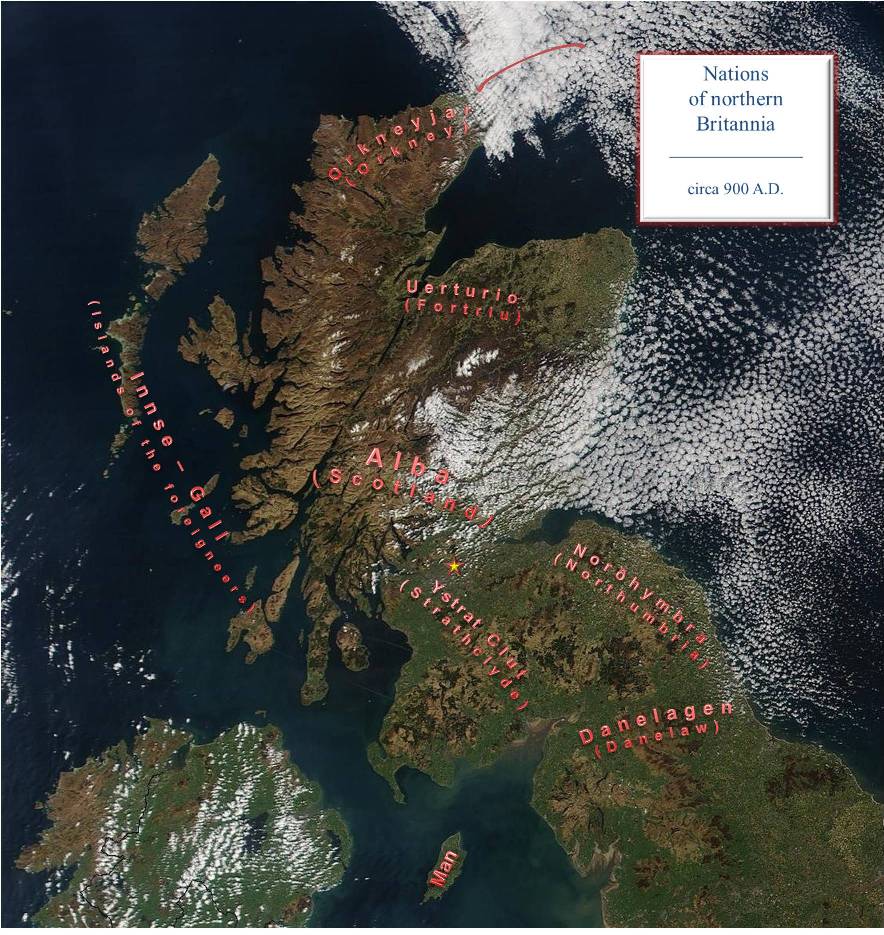 Norđhymbra suffered many incursions and control of it passed back and forth between the English, Norse and Norse-Gaels before finally ceasing to exist as an independent kingdom when Eric Haraldsson (Eric Bloodaxe) was expelled in 954 AD. It thereafter became an earldom of Englaland and its northern boundary was fixed at the river Tweed in 1018 AD..

Upon the collapse of Norđhymbra, its former lands between the rivers Tweed and Forth emerged as a political domain called Lođene (Lothian). It was annexed to Alba in 1018 AD by Máel Coluim mac Cináeda (Malcolm II). 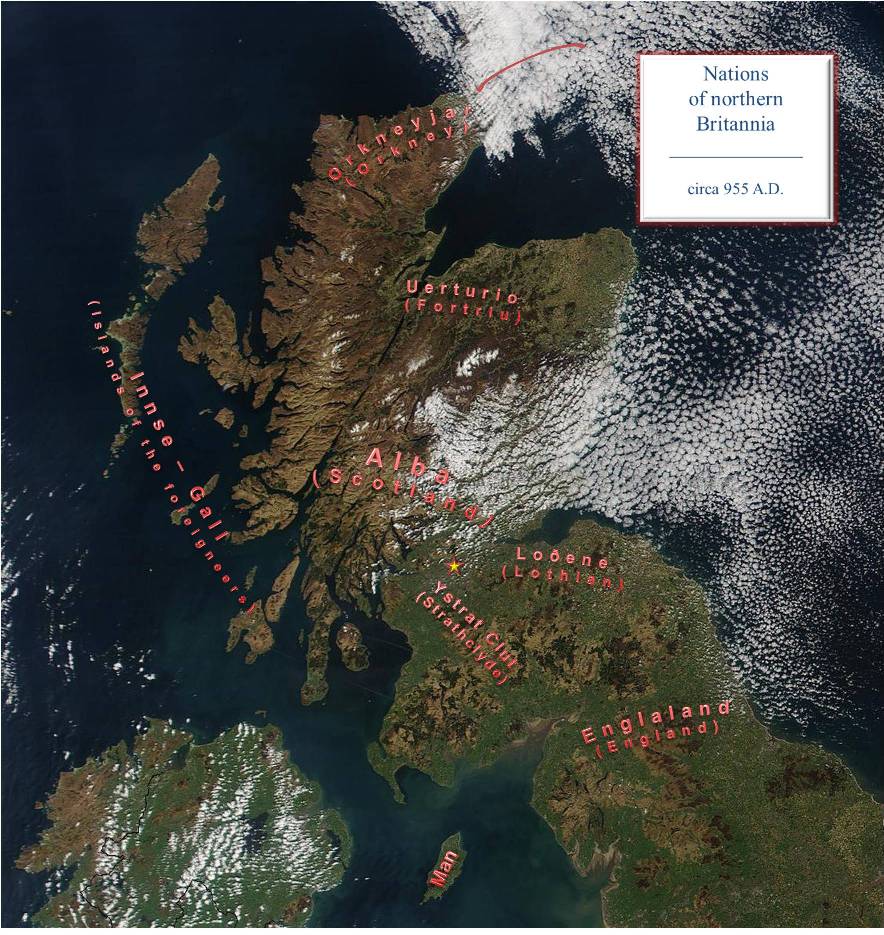 Moreb (Moray) emerges as a political domain in 1031 AD. when Mac Bethadh mac Findlaích (MacBeth) is noted as its king when Knud den Store (Cnut the Great ) invaded Alba. Moreb would continue to have kings until 1130 AD when the kingdom of Moray was destroyed by Dabíd mac Maíl Choluim (David I) of Alba.

Gall-Gháidhil (Galloway) is believed to be a separate kingdom in 1034 AD when the death of its king, Suibne mac Cináedha, is recorded in the Annals of Ulster and the Annals of Tigernach. Over the next century it would at times come under the influence of the kings of Dublin, Norway, Scotland and England. 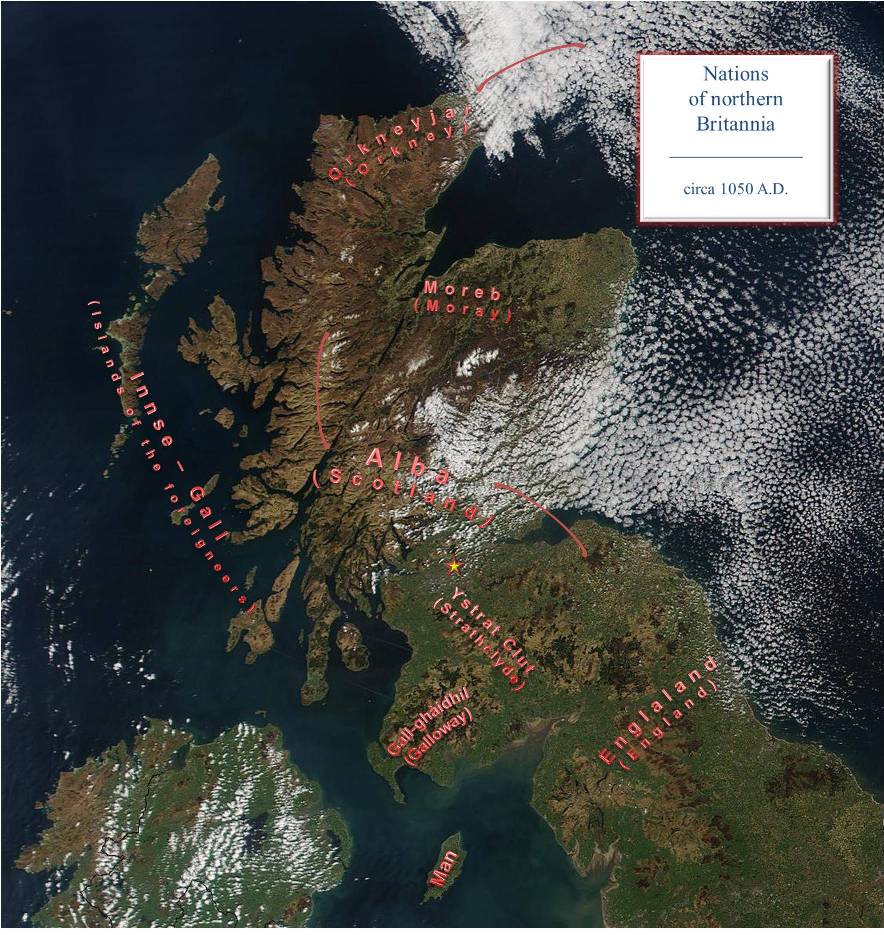 * Maps are based on the satellite imagery graciously made available by NASA in their Visible Earth (http://visibleearth.nasa.gov/) catalogue.

** While one can't be certain, Dr. Alan G. James sugggests that Alclud was the original form of Altclut. Dr. James is an expert on neoBrittonic placenames being the compiler of Place-Name evidence for Brittonic/Cumbric in N. England and S. Scotland. This is a searchable database of P-Celtic elements in place-names being installed on the website www.spns.org.uk of the Scottish Place-Name Society under the title BLITON (Brittonic Language in the Old North).